Charlotte Flair has signed with VaynerSports, a major sports agency. She is the first professional wrestler to join the agency. VaynerSports also manages MMA stars Colby Covington, Tony Ferguson, and Stipe Miocic along with several professional football and baseball athletes.

VaynerSports calls itself ‘The Agency for the Modern Athlete’. Charlotte Flair joins the list of top athletes managed by the firm, and she is as modern as they come. The Queen is the most athletic women in the WWE Women’s division, and her talents make her a standout in WWE.

Charlotte Flair is the best athlete in the Women’s division

She has won the Royal Rumble and main evented WrestleMania. She even featured in the first woman’s PPV main event and the first women’s Hell in a Cell match. Most recently, she went down to NXT to challenge for the NXT Championship, which she won at WrestleMania 36.

Her list of accomplishments are as commendable as her wrestling prowess. The daughter of Ric Flair has more than honed the skills of her father.

The ‘Nature Boy’ put on some classic matches against Ricky ‘The Dragon’ Steamboat and Terry Funk in WCW. Charlotte has also put on instant classics against Becky Lynch, Sasha Banks. Bayley and Ronda Rousey. She even elevated Trish Stratus to an incredible match at SummerSlam 2019 in the Hall of Famer’s final WWE match. 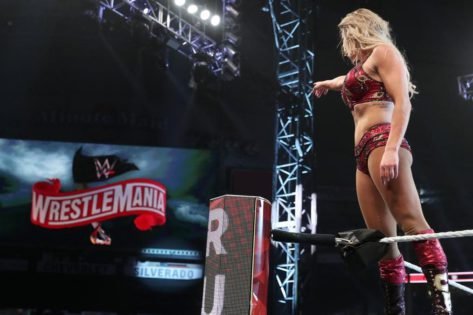 Charlotte Flair has had an incredible 2020. She started off the year by winning the Royal Rumble, challenging Rhea Ripley for the NXT Championship and emerging victorious. After losing the title to Io Shirai at NXT Takeover: In Your House, the Queen has taken a break from wrestling to undergo a cosmetic surgery.

Flair is in prime position to challenge for the Raw Woman’s Championship after her move to Raw in the recent WWE draft.

Flair was the one who broke Asuka’s undefeated streak at WrestleMania. She would surely be gunning for the gold once she returns to the ring. Joining the VaynerSports ranks only makes her year better.

US Marshal released from hospital after Bronx gun battle

Doc Rivers pushed son Austin away from 76ers to Knicks

‘The Crown’ is polishing the royal reputation: poll