Keeping up with Kendall Jenner’s love life can be tricky.

The “Kardashians” star has been romantically linked to a wide range of A-listers over the years, from singers to models.

Jenner has also dated many professional basketball players, most recently Phoenix Suns player Devin Booker. She and the shooting guard quietly called it quits in October 2022.

Below, Page Six breaks down all of the “Keeping Up With the Kardashians” alum’s boyfriends and exes.

Jenner was linked to Harry Styles from 2014 to 2015. They’ve remained friends. 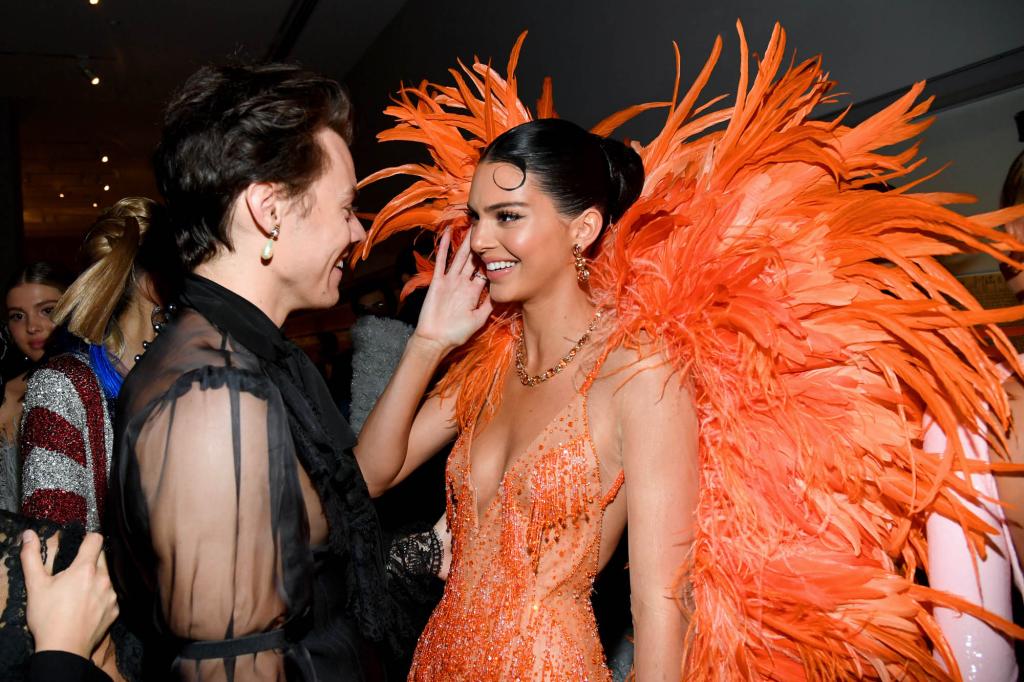 Jenner was linked to Harry Styles from 2014 to 2015. They’ve remained friends.

Getty Images for The Met Museum/

The “Masked Singer” host, who is set to welcome his…

Jenner was first spotted on a dinner date with Harry Styles in January 2014. While the duo were believed to have called it quits soon after, they briefly sparked reconciliation rumors in December 2015 when they were photographed getting cozy aboard a yacht in Anguilla.

Although their romantic connection did not last, the on-again, off-again pair have maintained a friendship over the years. In November 2022, Jenner even cheered on the “Kiwi” singer at a Los Angeles concert.

The model and Styles have never officially confirmed their past romance, but her mother, Kris Jenner, told Ellen DeGeneres in March 2021 that “yeah,” they were an item.

When Jenner’s friend Gigi Hadid briefly dated Joe Jonas in 2015, the Hulu personality reportedly had a similarly short-lived fling with the “Cake by the Ocean” singer’s brother Nick Jonas that summer.

“Nick was single and looking to date, and there was an obvious attraction. He absolutely thinks she’s hot,” a source told Us Weekly at the time.

She and the Cleveland Cavaliers player embarked on many high-profile dates, from Coachella to a Fourth of July bash, before calling it quits later that same year.

A source confirmed to Page Six in July 2016 that Jenner was dating A$AP Rocky.

Not only did the former E! personality show her support at one of the rapper’s shows that year, but they also attended the Met Gala together, w here Rocky was photographed grabbing Jenner’s butt.

From 2017 to 2018, Jenner dated Blake Griffin — even giving Vogue rare insight into their relationship.

“I’m happy. He’s very nice,” she gushed to the magazine of the Boston Celtics player in March 2018.

Jenner and Griffin’s breakup made headlines the following month.

In May 2018, multiple sources told Page Six that Jenner was dating Ben Simmons. The pair were on and off for one year before ending their relationship.

Prior to their split, she told Vogue Australia that she was “maybe” considering marriage.

“Definitely not now, but maybe one day,” the 818 Tequila creator, who is the only of her siblings without a baby, said in the May 2019 interview.

Jenner was briefly linked to Gigi’s brother, Anwar Hadid, in 2018 while on a break from Simmons.

The longtime friends were spotted making out in July 2018, shortly after Anwar ended his relationship with Nicola Peltz.

While Jenner often keeps her romances on the down-low, she did gush over Devin Booker while dating the NBA player on and off from early 2020 to October 2022.

“Him and Stormi have an amazing relationship,” she told Jimmy Fallon in September 2021, referencing her sister Kylie Jenner’s daughter. “She has the biggest crush on him, and I’m jealous sometimes. I’m like, ‘Stop. Can you guys not?’”

When the duo first broke up in June 2022, a source told Page Six that Booker’s “priority is his career” — and Jenner’s modeling similarly “dominates her life.”

However, the pair reconnected soon after, only to split again in October 2022.

“Both have incredibly busy schedules right now with their careers, and they’ve decided to make that a priority,” an insider told People at the time.